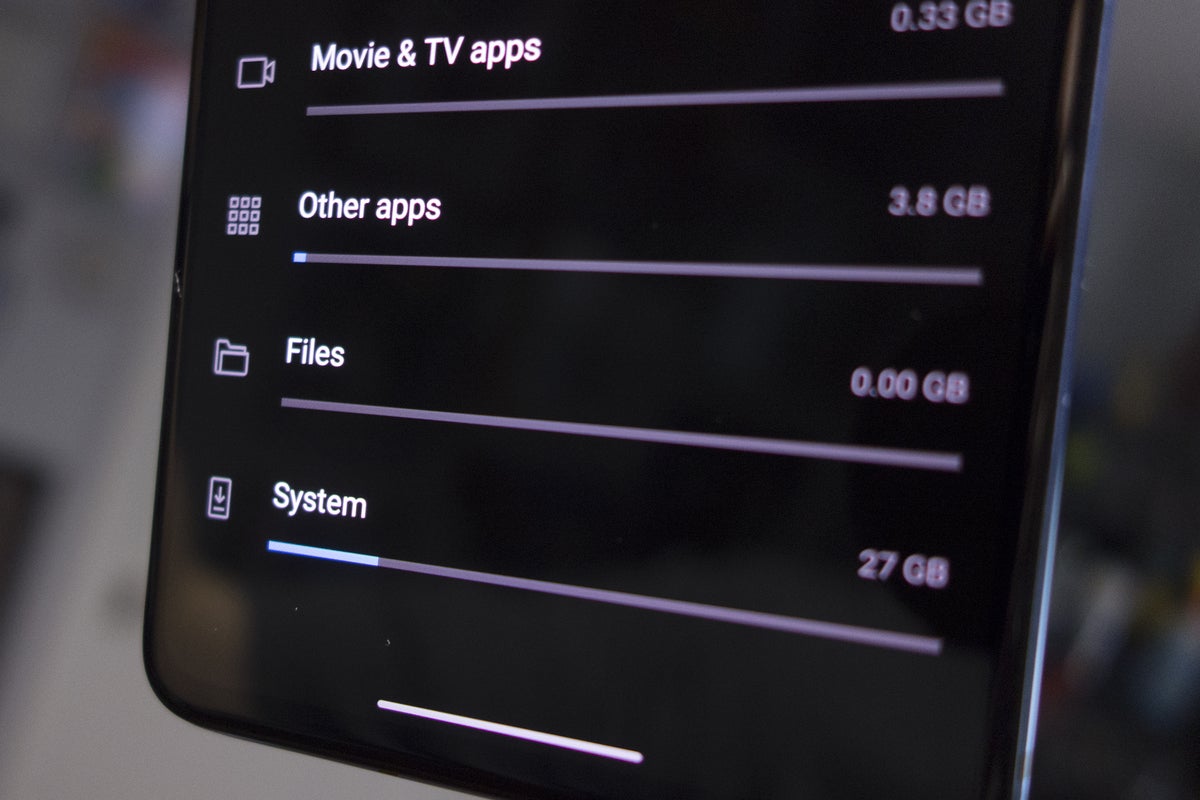 You might think that space concerns have gone the way of the dinosaur, along with 16GB tiers. An examination of your phone’s settings will likely tell a different story.

I first noticed it on my Pixel 4, when I had to delete a few apps because I didn’t have enough space for Play Store updates. I checked the storage tab: 2.7GB of photos, 1.4GB of music, 6.6GB of games, 25GB for 170 apps, and half a gig for assorted files.

I finally found the problem: 25GB for system files.

I quickly realized it’s an issue on nearly every recent Android phone. Over the course of the past few Android upgrades, system storage has taken up more space. If you have an Android 10 phone with 64GB of storage, look at the space sucked up by system files on these Android phones–and do the math:

For some perspective, that’s more space for system files than a Windows 10 PC requires. On a 64GB phone, system files could eat up 30 percent of your allotted space. Add some bloatware, a few games, your favorite apps, and a 4K movie or two, and you’re pushing the limits of what your phone can hold. Clear cache and restart all you want, that space isn’t coming back.

Will work for storage

You’d think at least Google’s own phone would handle things better than the rest of the Android community, but as you can see above, Pixels are some of the worst offenders. As phone storage has increased, so has the system space allotment. It’s gotten to the point where we’re once again questioning whether the base model offers enough space for all of our stuff.

The crux of the issue seems to be with hardware abstraction (Project Treble) and A/B partition selection (Seamless Updates). Those are the features that help your phone update faster by segmenting important system partitions like boot and vendor. That way phones can receive important updates faster, and install and reboot quickly as they arrive.

Those features require more space. Because phones aren’t taxed for storage as much as they once were, Google doesn’t mind eating up a bunch of it to support them. (That could be why the Samsung phones here use a smaller amount of system storage—they don’t support Seamless Updates. Though 20GB is still a lot of space.) But that’s hardly reassuring when you get a message telling you to clear out some space before the Play Store will update your apps.

If you’re rolling your eyes and thinking that a lot of Android phones come with 128GB of storage so it’s no big deal, consider that the Pixel 4 still starts at 64GB, as do a lot of other phones still sold in carrier stores. Plus, that extra space doesn’t come free.

For example, several of Samsung’s new lower-cost A-Series phones start at 32GB of storage, with the entry-level A01 bringing just 16GB. Because 16GB obviously isn’t enough space for the S20’s 20GB of system files, Samsung will need to pare down that number significantly. The question remains: If One UI 2 on the A01 presumably only needs about 5GB of space to run, why does it need many times that on more spacious Galaxy phones? We shouldn’t have to worry about losing 20 or 30 percent of our storage before we install a single app.

If Apple can build a modern operating system that uses a small fraction of space of your internal storage, then Google should be able to as well. But until that day arrives, make sure you have enough space on your phone, even it means spending a little more for 128GB.