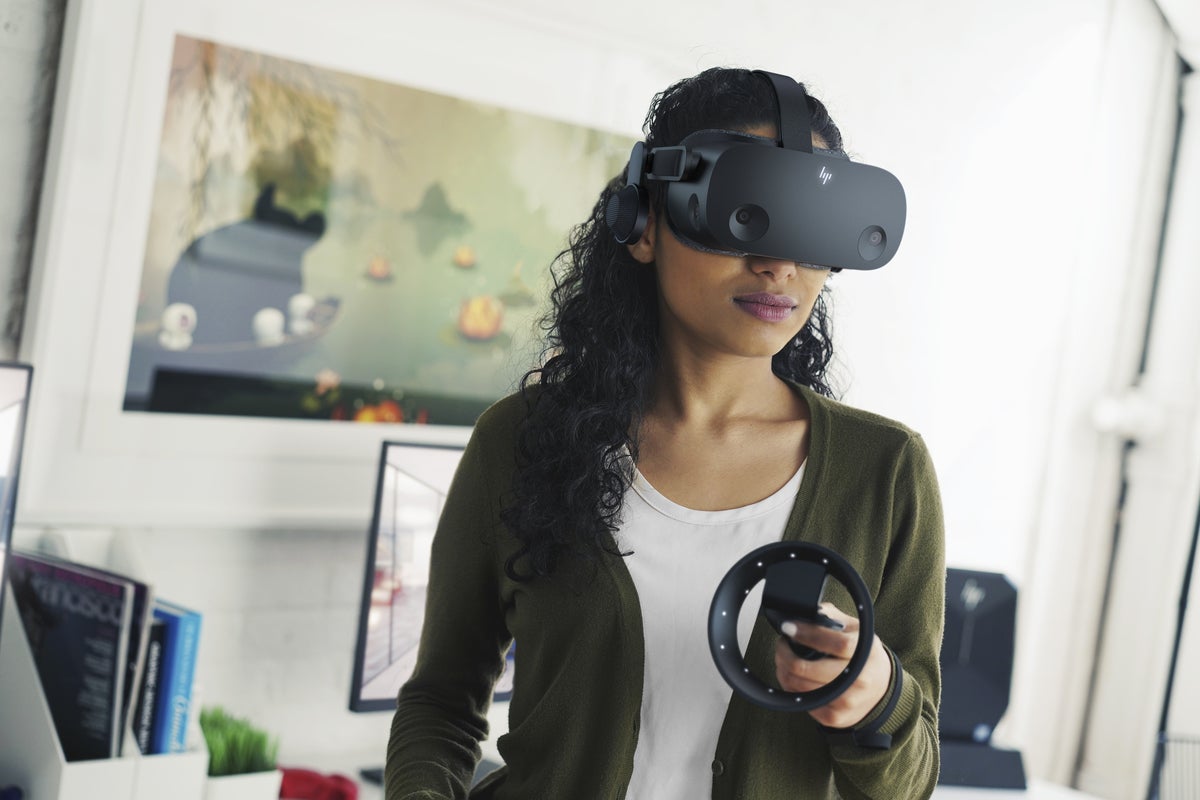 The HP Reverb G2 might be the savior Windows Mixed Reality (MR) so desperately needs. Hopefully. Announced Thursday but not available until the fall, HP has a lot to prove and a lot of skeptics to convert, myself included.

I’ve spoken often, and loudly, about my issues with the Windows MR ecosystem. Even in 2017 the hardware was a bit underwhelming, and the ensuing “upgrades” never rectified some of the fundamental problems with the platform. Last year’s HP Reverb featured a best-in-class display and an Oculus-like design—but paired with the Windows MR platform’s busted tracking solution, you might as well have been driving a Ferrari with square wheels.

But then I heard Valve was involved with the Reverb G2. Valve, who helped HTC launch the original Vive. Valve, who now makes the best VR headset money can buy, the Index. Valve, who with the Reverb G2 apparently helped HP make the first Windows MR headset to evolve the platform since launch. They’ve done it by…well, lifting a lot of the Valve Index hardware. Oh, and upgrading to four cameras.

To explain why the HP Reverb G2 matters so much, I have to delve into the history (and limitations) of the Windows MR platform. Bear with me.

Being first has its drawbacks. When the first Windows Mixed Reality headsets rolled out in 2017, they had one major advantage over the then-current Oculus Rift and HTC Vive: built-in tracking. No base stations. The Rift and Vive required setting up devices all around the room for tracking, but not Windows MR.

One device. One USB port. Windows MR made setup easy. The headset, with dual cameras and other sensors, could track both its own position in the room and the location of the two controllers. You could be up and running in a minute or two. Contrast that with the Vive, which came with mounting hardware so you could attach its boxy Lighthouse base stations to your walls, permanently.

But while base stations were (and are) ugly, they were also precise. The Vive set the bar high, with rock-solid tracking even in fairly large rooms. The Rift struggled a bit more with its room-scale solution, but it was still miles better than Windows MR. The dual front-facing cameras on Windows MR headsets simply couldn’t track a wide variety of important hand motions.

Throwing an object is an easy example. Imagine picking up an object up from the floor and throwing it. How often are your hands actually in view? When you raise your hand and bring it back, do you watch yourself do it? Probably not. The brain is remarkably good at physics calculations. You bend your arm, draw your hand back along your ear, then fling it forward. It’s intuitive.

Windows MR headsets lose track of your hands as soon as they’re out of sight. Oh, they try to compensate. Various sensors allow Windows MR to approximate where it thinks your hands might be when they leave the relatively narrow field-of-view of those front-facing cameras. The longer your hands are absent though, the less accurate the estimate. It made games like Superhot, where economy of motion is critical, incredibly frustrating on Windows MR headsets.

Worse, the cameras would occasionally lose track of the entire room if all landmarks temporarily disappeared from its sight. This could lead to disorienting moments where the player’s view snapped from place to place, or the headset left the player stranded a few feet above the floor. Again, the longer you played in any given session, the more likely you were to encounter issues.

The early Windows MR headsets made me skeptical of built-in tracking solutions. Then Oculus Quest and the Oculus Rift S came along, with four and five cameras respectively. Suddenly, built-in tracking was “good enough.” Sure, the Quest and Rift S still can’t match the Index’s precision, but they do a solid job under most circumstances, and they’re a hell of a lot more portable than the Index’s base stations.

What I can tell you is that it makes the Reverb G2 instantly more attractive than its predecessor. The two side-facing cameras should definitely help mitigate the MR platform’s tracking problems. We just don’t know how much yet.

I’ve spent so much time discussing the four-camera tracking because it’s an essential upgrade. As I said earlier, there can be no “high-end” Windows MR headset with the old front-facing camera solution—especially with the Oculus Rift S and Quest providing a better experience for only $400.

HP and Valve have made a number of other improvements to the Reverb G2 though, and assuming the tracking solution lives up to its potential? The Reverb G2 could essentially slot in as the entry-level Valve Index.

It is an Index, in a lot of ways. Just look at the speakers. Those are the same speaker-headphones employed on the Index, creating a field of sound around the user’s ears. The results are much more realistic than anything you get from the drop-down headphones used on the original Reverb.

Valve also helped HP custom-design new lenses for the Reverb G2. And if they look like the Index lenses? Well…they basically are. HP says they’re slightly smaller, to fit the Reverb G2’s display. They use the same Fresnel design though—and HP’s included a physical IPD slider like the Index, as well.

The only aspect I’m really concerned about is the controllers. HP claims it redesigned the Reverb G2’s controllers, ditching the stock Windows MR controllers. They’ve removed the touchpad on each controller, instead mirroring the more traditional ABXY layout from the Oculus Touch.

It’s a good step forward, but the Reverb G2 controllers still look a bit like third-party Oculus Touch knockoffs. I’ll be curious to know how comfortable they are, given the original Windows MR controllers felt angular and awkward. Either way, they’re certainly no match for the finger-tracking Index controllers.

There’s one more aspect I’m concerned about: price. The Rift S and Quest are a steal at $400. VR’s barrier to entry has dropped considerably since the consumer models debuted in 2016. While I love the $1,000 Index, it could use an entry-level equivalent.

The Reverb G2 lands north of competitive, though. At $600, it’s definitely cheaper than an Index—but still much, much more expensive than a Rift S or Quest. That’s doubly disappointing given that buying into Oculus’s ecosystem gives you headache-free access to some of the best VR titles available, like the Oculus-exclusive Lone Echo and Asgard’s Wrath.

Sure, the Reverb Gen 2 has better audio and a better display. It might even have better tracking, though we won’t know for sure until we’ve spent some time with the headset. But it might not matter. At $600, the Reverb G2 already feels like it’s at a disadvantage. It could be interesting for people who want an upgrade to the Rift S and Quest, but how many of those people would settle for the Reverb G2 instead of springing a few hundred dollars more for the Index? I’m not sure.

There’s no clear path to upgrade, either. That’s equally worrisome to me. Valve’s been pretty good about cross-headset compatibility so far. The Index will work with first-gen Vive hardware, so you could upgrade just the headset or just the controllers and save some cash. But HP doesn’t even seem sure whether its new controllers will be standard for the Windows MR platform going forward, and that’s a bit odd. The last thing VR needs is a more fractured landscape.

Even with some unknowns, the HP Reverb G2 is a promising development for the beleaguered Windows MR ecosystem. Windows MR has been a distant third-place contender for a long time now, behind Oculus and Valve/HTC. The Reverb G2 doesn’t solve all of the problems with Windows MR, but it at least solves some of the biggest.

The HP Reverb G2 releases this fall, and preorders are open now. I’m looking forward to giving it a try at some point. VR is still young, and there’s definitely a rising-tide aspect to competition. The more the better.