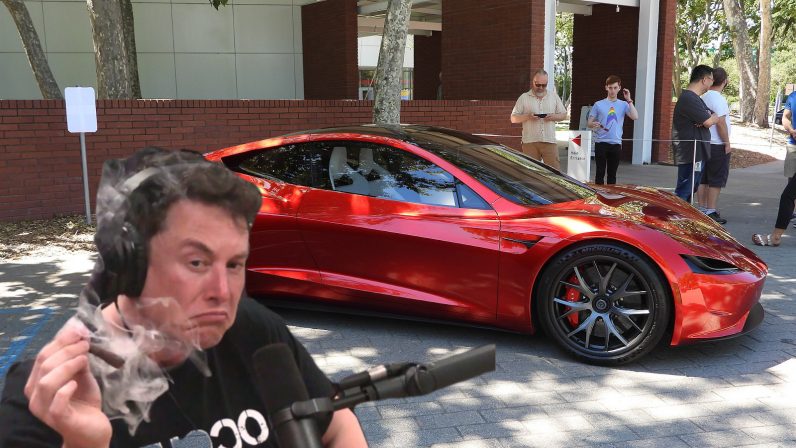 Tesla is currently working on two of the most hotly anticipated cars, not just for itself, but the whole auto market. However, it seems the electric vehicle (EV) maker can’t make both at once.

Speaking on the Joe Rogan podcast yesterday — which was recorded over the past week — Musk said that the Tesla Roadster would have to take a backseat so the company can focus on its other vehicles.

[Read: The low-down on the A-12 spy plane that Elon Musk and Grimes named their child after]

When Rogan asked Musk when he’d finally be able to buy a roadster, the Tesla head didn’t give a date. Instead, he said initiatives like increasing Model Y production and completing its Berlin factory are now a priority.

According to a report from EV focused outlet Electrek, it could mean that the Roadster won’t hit roads until 2022. Bear in mind, the Roadster was originally supposed to go into production this year.

Since being announced late last year, Tesla‘s angular and futuristic Cybertruck has carved out a door-wedge shaped gap in the market. Its radical styling has divided opinion, but since its announcement, there has been a swathe of other large electric SUV and pickups revealed. It seems there’s a growing market for this kind of environmentally aware utility vehicle.

Earlier this year, an unofficial estimate suggested Cybertruck pre-orders had surpassed the 500,000 mark. Given deposits are $100, this potentially netted Tesla over $50 million.

Unclear road for the Roadster

Despite actually being the first and original Tesla, the new Roadster is now like Tesla‘s “dessert,” Musk said. Before delivering the fine-tuned, hyper-fast, $200,000 electric sports car, Tesla has to get the “meat, potatoes, and greens, and stuff” right, he added.

I think Musk is saying that he recognizes his company has to walk before it runs. Despite making more affordable models like the Y and the 3, Teslas are generally still quite expensive but it’s generally accepted as a market leader when it comes to EV tech. However, charging $200,000 for the car will bring the company to a whole new playing field.

In that price bracket, Tesla will be competing with exclusive and desirable brands like McLaren, Bentley, and Aston Martin. If it’s going to be taken seriously, Tesla absolutely has to make sure the Roadster is damn near perfect. Musk certainly hasn’t shied away from making bold claims about the car’s performance, having boasted that it’ll be faster than any street legal production car, but the proof will be in the pudding, or should that be dessert?

Musk’s enthusiasm hasn’t been enough to stop production delays, mostly spurred on by factory closures amid the coronavirus pandemic and battery supply issues. Delays will likely continue until factories reopen to full capacity.

Musk’s S3XY CARS meme will have to read as just S3XY for now.